Writing on paintings in invisible ink.

Some of the ideas behind the invisible ink writing on my painting. 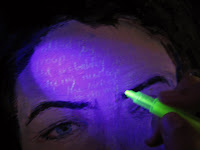 Close up of invisible ink writing on Sequin’s and Gold tipped Horns
On some of my paintings that I have written on in invisible ink, I write about the ideas behind the subject of the painting. The invisible ink can only be read or seen with ultra violet light.

With my self-portrait Sequin’s and Gold tipped Horns, I decided to write on the face and arms in invisible ink, a bit like an invisible tattoo. I also thought I would reveal what I have written on this painting in this posting of my blog. Without the knowledge of what the painting is about, the self-portrait comes across as a painful exploration in vanity.
The invisible ink writing on my self-portrait Sequins and Gold Tipped Horns says something along the lines of what I have written below.
I had the good fortune to be invited to a number of meetings with a group of five women, who were focusing on the exploration of mystical and esoteric pursuits.
At my first meeting a very nice lady who was in her sixties and for a short time while in her early twenties became a catholic nun. I will call this lady Mary; she asked me if she could do a reading for me using oracle cards ( this is a prediction or a physic observation into a persons life) . Oracle cards are like tarot cards, but the images on oracle cards are usually a lot less confronting than tarot cards. The images on these cards were quite badly executed miniature prints of semi naked women representing different aspects and qualities of the Goddess. For example one cards image was of a naked blond woman holding a broken red heart, this image was representing a troubled or failed romantic relationship.


These images made me feel uneasy. I realised much later after reflecting on the whole experience why I felt so uncomfortable. The images to me portrayed the idea of wishful thinking. I believe wishful thinking can at times be beneficial and at other times can be quite negative. These cards seemed to embody the idea of a wish or a kind of clinging on to a hopefully better future, which to my view leads to the connotation of an individuals fate being out of ones control and a lack of being in the present and taking responsibility for your thoughts and actions and in-turn your future.


I will also point out that the other women in the group thought the cards had great artistic merit and felt some kind of spiritual connection with them. I by no means think that my views are superior to the other women who attended these meetings. My observations of the pictures that made me feel uncomfortable eventually revealed a connection I had with these kinds of corny symbolism. Investigating a difference often gives rise to finding a similarity.
Having spent many years studying Tibetan Buddhism I thought it would be beneficial for myself to look at aspects of wishful thinking in my wishy washy practice of Buddhism. This is how the self-portrait Sequin’s and Gold tipped Horns came about. It is my giant wish fulfilling oracle card. It is me set in the future, in another life time, returning from the top of a mountain as an enlightened being.  The closed lotus flower is a gift I offer to show the path or knowledge for others to become enlightened.
The cow represents my world and steering the horns is having absolute control over the direction my life takes. The sequins on the dress represent the many life times it has taken to achieve enlightenment.
I experience a similar uncomfortable response to my painting as I did to the oracle cards, which was my intention in executing the painting. The painting only reveals the final enlightened state and not the intricate and uncountable actions taken to achieve enlightenment. I think this could be where the unease in the image lies. The actions in achieving this state have been compiled into symbolism, which can be difficult to decipher and when romanticized, can for me be annoying. My painting and the Goddess oracle cards have a similar wish fulfilling component, my painting is a little easier on the eye for me than the cards but this is just because the subject I have painted about is more familiar to me than the cards of naked Goddesses holding broken red hearts and the like.
Going back to the oracle reading with Mary.  The information Mary relayed to me was insightful for that particular time of my life and for someone who didn’t know me at all.  What fascinated me was the deepening of focus Mary became submerged in while doing the reading. A combination of concentration, a closing off of all external stimulation and the images of Goddess cards triggered a subtle but visible change to her conscious state. I spoke to Mary after the reading about some of the things she had told me; to my surprise she had very little recollection in anything she had said. This was the beginning of my fascination with the mind and its potential for different states of consciousness and a subject I am continually happy to explore. 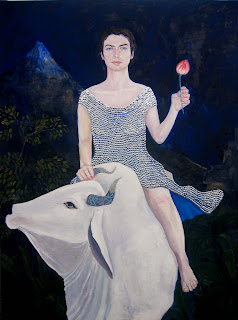