Tears of Compassion
In 2008 I sent a letter to Queen Elizabeth the II requesting that I collect a tear of the Queen to aid in the future happiness of people.
This artwork was initiated around the time, the then Prime Minister Kevin Rudd apologized to the Aboriginal community. My eight-year-old daughter asked why the Queen of Australia hadn't already apologized to the Aboriginals of Australia.
Realising a connection had been created between my daughter and the Queen; I decided to initiate an art project focusing on the concept of collective similarities in thought, creating a collective consciousness.
The art project mimics homeopathy, which the royal family have embraced as remedies for ailments over the years, with the treatments basic theory being a little can make a great difference and like cures like.
My intention was to combine the tears of the Queen with my daughters and anyone else who would like to participate in the project and finally empty them into the ocean. With the same analogy as homeopathy, a small action can make a great difference.
The Queen politely refused to give me one of her tears.
I would like to continue the tear project without the Queen’s tears. The logistics of collecting tears is difficult. My way forward is to collect virtual tears from around the world. This would entail creating a website and compiling information to keep count of the virtual tears.
The participant giving a tear would be encouraged to do the action with the emotion of compassion in mind.
By December 21st 2012 the virtual tears would be counted and these calculations would be converted to the weight of water, the water would then be emptied into the ocean, continually keeping in mind the emotive intention behind the tears, is compassion. The date chosen to release the tears is the controversial date that has been described as a shift in human consciousness. The weight and accuracy of this date is subject to debate but I feel it is a fitting time to complete the project.


Oyster Bay
Sydney NSW 2225
Australia
Her Majesty The Queen
Buckingham Palace
London SW 1A 1AA
London, United Kingdom
Dear Queen Elizabeth ll
I am writing to you in regards to a work of art I have commenced. The aim of this artwork is to ignite the idea of the power of thought and action and imagined realities.
My eight-year-old daughter questioned your role as the Queen of Australia and as to why you hadn’t said sorry to the indigenous population of Australia, as did our Prime Minister Kevin Rudd.
I explained to my daughter that the Royal Families ties to Australia are now less political and that the Queen no longer has much to do with Australia.
It came to my attention that my daughters concern for the correct procedure for apologising to the indigenous population of Australia had created a connection between my daughter and yourself, a connection of concern for people’s happiness.
The artwork consists of collecting a tear from my daughter and a tear from yourself, representing the sorrow and suffering of people. Then combining the tears and empting them into the ocean, harbouring the same principles as homeopathy, a little can make a great difference and like cures like.
The concept with your assistance could cause many people to think about the future happiness of all people. The process of imagining and sympathising the plight of others defines humanity and is an important step to collective thought and change.
The empty plastic cylinder that held the tears will be exhibited, with the intention that the empty container will create discussion as to the value of the empty container and the merit of the idea.
I would greatly appreciate it if you could please send me one or more of your tears in a small plastic cylinder container; a small amount of saline water can be added first so the tears don’t evaporate.
Thank you for your consideration and hopeful involvement.
Sincerely
Hannah Hall


Below is the Queen's letter of reply 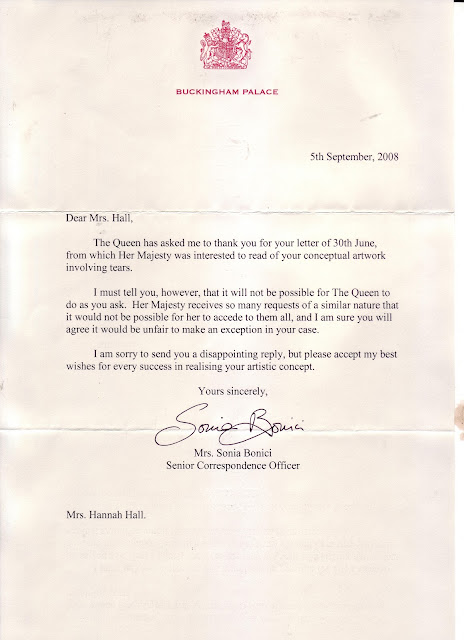 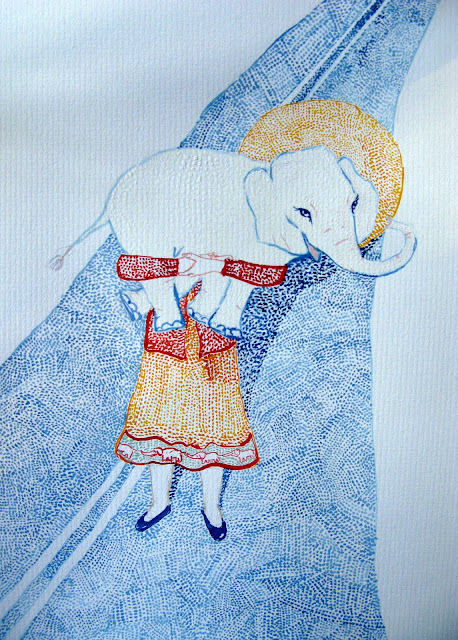 White Baby Elephant dream continued.
So I picked up the baby elephant and walked towards the car. Surprisingly enough the elephant was not too heavy.
Posted by Hannah Hall at Monday, August 01, 2011 No comments: