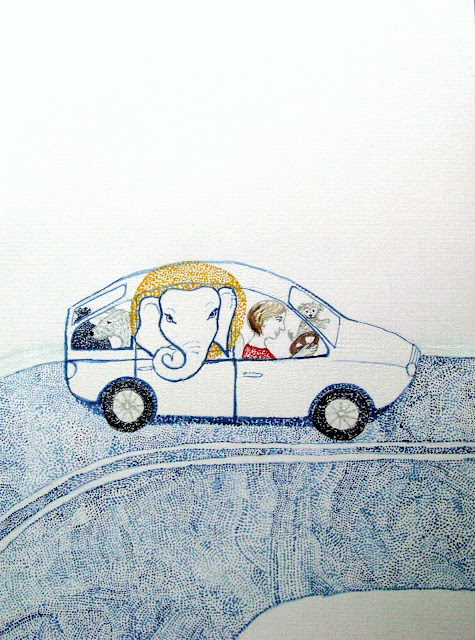 Illustration 4,   White Baby Elephant 4, gouache on paper, 30x21cm, 2011.
White Baby Elephant Dream continued
I put the White Baby Elephant in the car where there were already two grey dogs, one large and one small. The large dog looked like an elk-hound or an Irish wolfhound cross. The smaller dog looked like a poodle cross. Also in the car were two plastic garbage bags filled with second hand clothes destined for a charity bin.  I realised that I was on my way to the country to visit my mother in a small country town to celebrate  the annual fair where farm animals and fruit and vegetables were on display.
Footnote:
In my physical waking life, I have a large grey twelve year old standard poodle called Lou lou, who was neither of the dogs in my dream. When I bought Lou lou as a puppy I was living in an old house in Sydney with my family. While in this house and before Lou lou arrived, I would occasionally see from of the corner of my eye a large skinny grey dog with wiry fur. It looked like an Irish wolfhound cross with a sad persona. At the time I disregarded the sightings of the dog as some kind of confusion. When Lou lou arrived into our lives I stopped seeing the grey, skinny dog.

The small grey dog in my dream is not a physical dog but I had also seen it before I had the dream.

I have attended the last two Sydney teachings from His Holiness the Dalai Lama and at times found my mind shutting  down as I found absorbing large chunks of Buddhist philosophy overwhelming. My eyes would be open but I wasn't processing sights or sounds. I could see my surroundings clearly but my brain isn't focused on what I see.


In this state with my mind and body relaxed I saw the stadium where the teaching was taking place gradually fill up with a beautiful transparent white mist. I looked down to my leg and there was a small grey dog, standing on it’s hind legs, with it’s front paws resting on my left knee, asking or looking at me as if it wanted a pat. I tried to touch the dog but it disappeared.


The following year during the second teaching I received from the Dalai Lama I had a very similar experience to the year before. I saw the same small dog, this time just standing by my feet looking up at me. When I focused my attention on the dog again it disappeared.


What I find particularly interesting about the grey dogs is that both were originally seen with my eyes open but did not exist in my physical world. Contemplating on the particular state my mind was in when I saw the small dog I recognise that my mind was functioning in a slow alpha or theta state, which is similar to a dreaming state while asleep.


Both dogs were also seen while I was dreaming with my eyes closed in the White Baby Elephant dream.  I also found it interesting that I saw the little grey dog twice and both these sightings were most likely triggered by a particular conscious state, which was triggered by the Dalai Lamas teachings, which stems from words and their meaning and their emotional impact.


Particular emotions have specific vibrations. You could go so far as to say that all people and physical objects have a specific vibration. For example a calm person can make someone else feel calm, not only from his or her body language but also from the vibration they have. I sense the Dalai Lama has a powerful vibration and I imagine and feel (imagination and feelings are the basis for creating our conscious reality) that his vibrational influence ignited what I would describe as a momentary expanding of consciousness.


Amit Goswami, a theoretical quantum scientist, describes all phenomena or our reality as being created or manifested from our consciousness. If this is the case, dreaming states of consciousness are as much a justified reality as waking consciousness. Perhaps meditation and other vibrational influences are merely tools to lift a veil to reveal other possibilities of conscious realities or dimensions. Whatever world you find yourself in it arises from your consciousness.
Posted by Hannah Hall at Tuesday, September 27, 2011